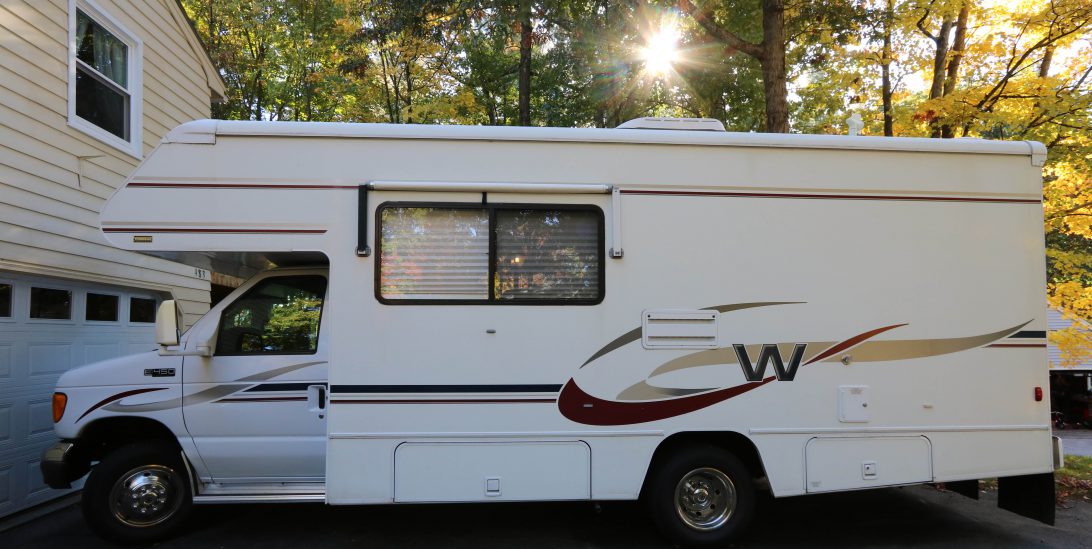 We’ve been having fun and fixing problems during our travels in New Mexico and to Fort Collins, Colorado, plus kittens!, so here’s what we’ve been up to. Apologies for the length of this one, it covers a lot!

Sunday, April 8 we departed Silver City for Deming, and with very high winds in the forecast and a desire to see Deming anyway, we kept things simple and limited our drive to an only an hour. Deming, New Mexico is a town of about 15,000 people, making it a bit larger than Silver City, and for us, the best part of Deming is its location. It’s an easy one hour drive from there to Silver City or Las Cruces, and it’s an easy drive to El Paso or Tucson too. It also has several state parks within driving distance, and there are several wineries, including the largest in the state of New Mexico.

We found an extremely affordable RV park for two nights. We knew we’d be seeing the arrival of kittens soon, so we wanted to be prepared with hookups just in case. This park is actually pretty awesome – although the wifi wasn’t usable at our campsite, it was in their lounge/conference space area, which also has a TV, tables and a chairs and a full kitchen and half bath. There’s also a hot tub – it’s great, although I managed to almost pass out after using it! – and there are roomy bathrooms and super affordable washers and dryers. The owners live on site and the care they take here at what could be a very simple, boring park is really lovely.

The first bit of excitement was that when we arrived, Ross realized he’d left the surge protector in Silver City! So he hopped back in the car while I hung out with the cats and enjoyed the crazy wind. We discussed adventuring out that night, but we were both very tired, so we took it easy…which turned out to be a good thing because at 1 a.m., the blood on my pillow told me the kittens were coming! Ross hopped out of bed and made Squeak comfortable and the babies started coming.

We had three in the first few hours. Ross took a break to sleep (I had laid down after a couple of hours) and I took over assisting Squeak at 6:30 or so…I couldn’t figure out what she wanted, but eventually it was clear a fourth was coming. She’d already moved the first three to a new location (her favorite box) instead of the corner she’d initially found. After a few more hours, there would be a fifth kitten, a runt, although the sweet thing didn’t make it longer than three days. (Squeak’s instinct was to move the runt to the catbox….Ross caught her and stopped her. But maybe mom instinctually knew this one just wasn’t going to be able to make it.)

We then spent the day trying to get some sleep and (in Jamie’s case) still get some work done. By mid-afternoon, we decided we were up for exploring a bit, and the cat situation was under control…plus Squeak had been reluctant to just hang out with her kittens, so we wanted to give her some alone time with them.

I’d done a lot of research on Deming because the monthly rates here are extraordinarily affordable. It will be a good place to come back if we need to save some money and perhaps still do some work in our favorite places this winter. So we visited a great music store/pawn shop (it really was nice), made friends and learned a lot at the Visitor’s Center, attempted to get ice cream (it was closed), saw a bit of the downtown area (it’s seen much better days, unfortunately) and visited Peppers Supermarket, which was honestly probably our favorite part of Deming! We scored some amazing clearance deals and loved the fantastic selection of Mexican products and alcohol here – I found a pineapple hard cider I can’t wait to try.

The quirkiest thing I found in my research is that the library keeps interesting hours….it’s closed Saturday through Monday, but the plus side is it’s open almost twelve hours the other four days.

After our supermarket visit, our plan was to celebrate the birth of kittens at the winery. But we were both very hungry. Rather than distract Squeak with our return, we went to Sonic for a quick bite (there were very limited options for fast food) and then proceeded to St. Clair Winery and Tasting Room.

This place is really beautiful, and we’ll be reaching out to inquire about playing there on Friday evenings. They host yoga and sip and paint and tours (we want to save up for one, it’s a day-long adventure) and they offer 6, 1 ounce tastings for $6. But we were in luck. At the Visitor’s Center, they gave us passes for free tastings! So we could get 6 free 1 ounce pours….and then when you go to the winery, everyone is given two free pours, plus a third that is their featured wine of the day. So we got 9 free pours at our visit! Each!

The wine here is really fabulous. We tried a ton, were offered additional free stuff, chocolate to go with the sweet wines…it was amazing. Realizing how much we were drinking, I suggested to Ross that we buy some cheese (they have some food for purchase, but only the mousse was gluten-free), so we got an outstanding strawberry champagne hard cheese from the Finger Lakes region of New York that paired perfectly with our drinking. We also picked up a bottle of red chile wine that we look forward to enjoying.

The next day we traveled to Alamogordo, and besides an excursion to Walmart when I realized we had a tire losing air, it was a pretty beautiful and uneventful trip. (We’ve been having Walmart Auto Centers fill our tires, and they’ve been amazing!) We did visit a silly travel stop on the way too.

Alamogordo was nice, overall. There were things we loved and things we didn’t, but we’d be happy to visit here for a week or even a month to play tourist or escape to this beautiful RV park in Tularosa, where we ended up saying goodbye to our little kitten. The campground views and nature walk cannot be beat, and with amazing restrooms, decently priced laundry and useable wifi, it’s a really great park. 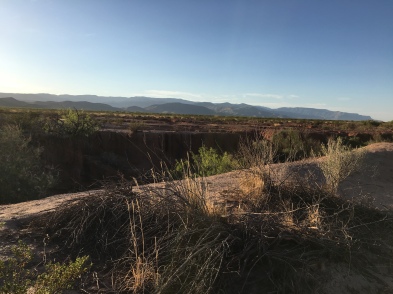 I did more sightseeing than Ross in Alamogordo. I visited White Sands National Monument (it’s as amazing as I’d hoped), found the local supermarket options (the Albertson’s Market might be the most beautiful supermarket I’ve seen), visited the library, got so-so ice cream at a highly rated local cafe in the historic downtown (most of the town’s charm is in this area, it seems) and visited Nature’s Pantry, which I will be returning to for breakfast (New Mexico gluten-free bagel, please!) and for its insane selection of gluten-free treats. Albertson’s also has a better gluten-free bakery section than I’ve ever seen at a supermarket….pretty great.

After my morning to mid-afternoon wandering session, I headed home to relax for a bit before our gig. Although the wind made us nervous, we had a successful performance at Heart of the Desert Winery & Pistachios (I tasted a couple of wines and a pistachio chocolate, and they were very nice) and we wrapped up the night with a visit to Caliche’s for a hot dog (Ross), nachos (both of us) and a hot fudge sundae with strawberries (me).

The forecast for the next day of driving called for insane winds, more than 35 miles per hour plus gusts. We knew we had to get to Fort Collins soon, but we wanted to be safe. We decided we’d try it and see how we did. We actually did very well, and we found a nice rest stop in the middle of nowhere to teach. Given how windy it was, and how we were truly in the middle of nowhere (Cline’s Corners was the stop), I said to Ross, let’s stop driving and quit while we’re ahead. We also had a great signal here.

Well, that was probably a good call. First we realized there was a hole in our battery compartment (it had rusted to pieces, basically) so we had to figure out how to fix that for the drive. And later we realized we also need a couple of tires filled. So driving really wasn’t an option…and we were in the middle of nowhere…and the winds were predicted to keep getting worse into Friday!

Ultimately, we stayed put for almost twenty four hours. We mostly made due with truck stop food (Subway and gas station fare, but they had great fudge!) and I went to a fabulous, casual restaurant called the Encino Fire House which apparently won an award for best new restaurant in New Mexico last year. I had some delicious gluten-free pulled pork corn tacos and a side salad, and the owners were extremely nice and easygoing. The next day, we picked up bungees and a fake license plate and used them to put our RV back into place…and we called Good Sam for help with the tires. Thankfully, once that was all taken care of, the wind calmed down a bit, and mid-afternoon we drove through the incredible pines on our way to Las Vegas, New Mexico.

(Note to self: don’t drive Route 3 in an RV. Jamie had a pleasant drive, but Ross did not!)

Las Vegas seems like a really nice place. It’s a college town, and we stayed at a very convenient RV park, Vegas RV Park, about which my only complaint was that if there was free wifi (instead of paid), we couldn’t figure out how to access it. We had 2-3 bars of T-Mobile and great Verizon though, so that was good. We were within walking distance of many businesses, including the local gaming store, Playerz, for Ross (he enjoyed it) and it was extremely easy to get to everything in town, including a cute downtown where we had dinner at Dick’s Pub & Restaurant. (The service and food were fabulous!) It doesn’t seem like a big arts town, but it’s only a little more than an hour to Santa Fe from Las Vegas, so it might be an affordable base to check out Santa Fe in the future.

From Las Vegas, we had about a five and a half hour journey ahead by car, so in our RV, with a few stops for gas, lunch and resting, we headed out at 10:30 a.m. and arrived in Fort Collins at our campground a few minutes before 8 p.m. Along the way, we visited an awesome travel center with a retro feel, a Subway, another restaurant, ice cream and antique cars and other fun stuff. 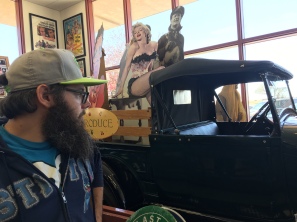 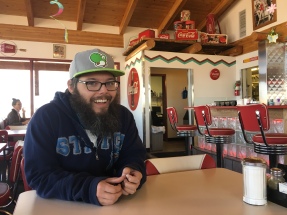 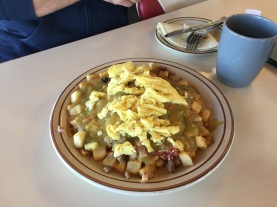 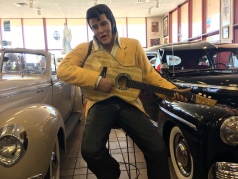 Ross wasn’t feeling Subway, so we sat down at the diner-style restaurant for what turned out to be a very tasty meal. (I had very limited gluten-free options, but my Hot Rod green chile burger and fruit were tasty, and Ross’ breakfast skillet with green chile was pretty fabulous.) We passed through some cute Colorado towns, saw the Rockies and arrived safely. What else could we ask for?

Thanks for reading. Stay tuned for more adventures in Fort Collins and with raising kittens in an RV. And if you liked what you read, consider reading Affordably Awesome in Delaware or a Tiny Taste of Norfolk.